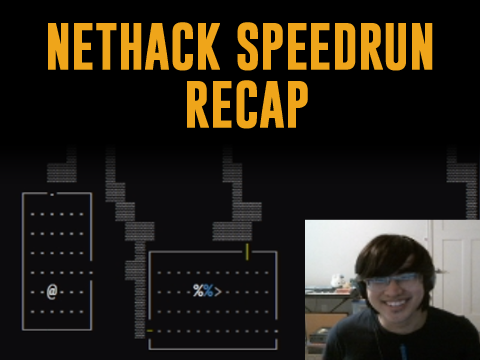 This week NetHack was played in front of an audience of over 4,500 live viewers at the European Speedruner Assembly (ESA) Summer 2021 speedrunning marathon. This is probably the largest audience that a NetHack livestream has seen to date. The game was played by luxidream, who holds the current NetHack speedrun world record with a 49-minute ascension and can usually be found at the top of the tournament leaderboards.

The audience at the ESA Summer 2021 marathon were there to watch all of the different games that were ran throughout the event, and our beloved terminal-based ASCII-graphics NetHack really stood out compared to all of the games that came before and after it — retro games are popular among speedrunners but NetHack takes this to another level.

As the previous speedrun (featuring an adventure-RPG based on the Minecraft engine) ended and the upcoming NetHack speedrun was announced, luxidream appeared on screen alongside a display of his terminal, and the many members of the NetHack community who were waiting patiently in the chat finally lit up in a roar of excitement and anticipation, cheering on this milestone in NetHack history and wishing good luck to luxidream as the run was nearing its start. Once the run began and those familiar symbols appeared on the screen to represent our hero and the dungeon ahead of them, a wave of nostalgia flew through the chat as veteran gamers recognized the game from earlier points in their lives and reminisced on their favorite deaths, and was quickly followed by astonishment at the idea that they were about to witness someone attempting an actual speedrun of NetHack.

The general public reception towards the unfamiliar and seemingly-ancient game was impressively positive, as viewers fed off the energy and excitement of all those NetHack die-hards who came out specifically for this event. The live viewer count remained fairly consistent with the numbers from the runs that occurred before and after.

After rerolling dwarven valkyries for a favorable constitution stat (19+ is favored for improved hp progression), luxidream began blazing through the dungeon, saw several large shops as they reached level 5 and used a fountain to convert their starting longsword into the endgame-worthy artifact Excalibur. After a brief visit to minetown, luxidream entered the sokoban branch in search of its reward. While checking the three doors at the end of sokoban to claim the prize, a freezing sphere popped out of one of the rooms and exploded before luxidream could react, waking up the rest of the monsters in the packed room. A now-awake yellow light exploded on the next turn, blinding luxidream and spelling the end of this run: a death soon followed with 14 minutes 51 seconds on the clock. This was a setback, but enough time remained in the 90 minute speedrun estimate to start another run.

Luxidream rolled up a new valkyrie, and 11 minutes later was already back where they’d left off, now exiting a completed sokoban with an amulet of reflection in their possession (the preferred reward from this branch for the speedrun). Luxidream then continued through the dungeon, traversing many levels before reaching Medusa’s island, which he dug past before arriving at the castle a few floors later. With no great methods for dealing with the castle, he zapped a wand of striking to destroy the drawbridge and created a path across the moat using a boulder from the level’s entrance maze. Monsters poured out of the castle while luxidream lured all of the follower-type monsters up the stairs to dispatch them one-by-one.

After making a dash past the remaining monsters, the castle’s wand of wishing was acquired and luxidream then ate an egg to confuse themselves in order to use a teleportation scroll to levelport off the map. Luxidream had previously gambled on eating a tengu corpse and through sheer skill good fortune, gaining the teleportation control intrinsic ability which proved very useful throughout the run and saved a wish which would have been used on the ring which confers the very same ability.

Using the wand of wishing to wish for a cursed scroll of genocide, luxidream created some wraiths and ate their corpses to gain enough levels to enter the Quest side-branch. After the quest, another cursed genocide scroll was used to summon some gray dragons, which were killed for their scales. This run somehow never found an enchant armor scroll, so these scales were worn for the rest of the game and never converted to dragon scale mail which is the best armor in the game. This lack of armor class was very punishing throughout the rest of the run.

Before entering gehennom, a pit stop was made at the castle to nurse dance, a strategy that involves using nurse-monsters to increase your maximum hit points. This normally wouldn’t be done during a speedrun attempt, but was a precaution here to make the run a little more “marathon safe”. These extra hit points proved to be essential as the poor armor class (only 3 AC at the end of the game!) meant that luxidream’s hit points were constantly dropping to near-zero even while fighting relatively mundane enemies.

After claiming the Amulet of Yendor and embarking on the ascension run, an untimely energy vortex managed to destroy luxidream’s empty wand of wishing only moments before he intended to use it for one final wrested wish. This was a big blow to the run as the endgame threats were becoming increasingly dangerous and threatening the success of the run.

On the plane of fire, the Wizard of Yendor appeared one final time but luxidream was out of wand of death charges (the method he had been using to quickly dispatch with this dangerous foe) and had no way to recharge the wand. At the time this could have easily ended the run, but luxidream managed to defeat the wizard in melee and pressed on to the game’s final level: the astral plane.

Upon entering the astral plane, luxidream scouted the map and decided to face the rider Famine, so he buffed up with a speed potion and ate some food to raise their nutrition before facing them in melee. Famine was quickly dispatched but revived before luxidream could leave the room and dropped him to 13 hit points before falling once again.

Just outside of the high temple, luxidream was surrounded by enemies and taking 50+ damage per turn to their 200 hp health pool, and spent their only amulet of life saving before realizing what had happened. This looked like the end of the run with no way out, but with the help of one last potion of full healing they managed to make a path by killing the weaker enemies surrounding them and got to the choke point behind the temple. Luring the pack of enemies around the temple, luxidream came around the other side and managed to get inside. The altar was chaotic, and using a helmet of opposite alignment found earlier in the run, he offered the Amulet of Yendor and ascended to the status of demigod-hood!

The total event timer (including the earlier failed attempt) ended at 1h36m05s, a few minutes over the estimate. The victory was far from guaranteed, and this was conveyed to even the first-time NetHack viewers as luxidream’s hit points bar was constantly plummeting throughout the end of the run. The entire final stretch was full of risk and danger, leading to quite an exciting finish!

Luxidream and tonehack provided commentary throughout the run, knowing that thorough commentary would be essential for translating the game and the status of the run to the audience which was largely viewing NetHack for the first time. The speedrun was rebroadcast in German, Japanese, Russian, and Spanish; the individual commentators can be found in my preview post. Throughout the event there were periodic technical difficulties, from blacked out screens to muted commentary, but overall it was a big success.

This truly was a significant event in the history of speedrunning for NetHack and all other traditional roguelikes. The door has been opened to see these oldschool games with fervent communities played before larger audiences. The NetHack speedrunning community has been growing over the past year, after remaining mostly stagnant for a decade after Adeon’s 1h03m ascension in late 2011. Currently, three of the top four NetHack speedrun times have been set during the past two months.

Outside of NetHack, players of many other traditional roguelikes have pushed boundaries to see how quickly they could win at their respective games. Dungeon Crawl: Stone Soup’s speedrunning community is even more active than NetHack’s. I’m just one roguelike fan, but I sincerely hope to see more exposure of this genre at events like this in the future.

If you’d like to learn more about speedrunning NetHack, check out luxidream’s guide How to Win Really Fast, and their weekly Twitch livestream.

I’d love to hear about your experiences with the event, and your thoughts on the future of roguelike speedrunning, either in the comments below or through any of my media channels (linked at the top of the site).