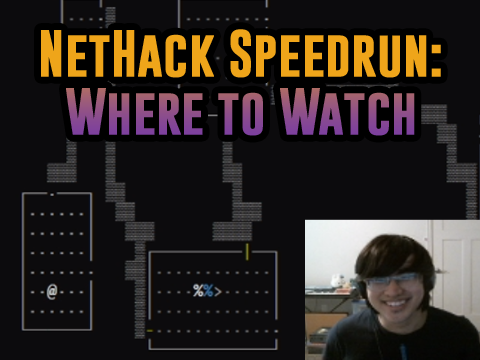 On July 27th luxidream will be speedrunning NetHack at the European Speedrunner Assembly’s Summer 2021 charity speedrun marathon! This is the first time NetHack will be streamed to an audience of this size, so come out and cheer on luxidream as they showcase their talents on the big stage. Luxidream is a very talented NetHack player who currently holds the NetHack speedrun world record with a time of 49m 00s. Tonehack will be providing co-commentary throughout the run. The event is scheduled to run for around 90 minutes.

NetHack is one of the first traditional roguelikes, originally released in 1987. Today, NetHack remains one of the most popular games in the genre, has a very active community, and is even still under develpment with new updates released to the development branch almost daily. NetHack itself is a dungeon-diving hack-and-slash game that plays similarly to a turn-based Diablo with an overhead grid-based map displayed with either ASCII symbols or graphical tiles. Tuesday’s speedrun will be played on NetHack version 3.7.0, which is under development and has many exciting new changes since the last official stable release.

The NetHack speedrun will take place at 3:33 PM UTC. Here is a link to a countdown timer for the event.

Here is the full ESA marathon schedule, adjusted to your current timezone.

The even will be broadcast on ESAMarathon’s twitch channel. The stream will be rebroadcast in several other languages, linked below.

This is a charity marathon, so throughout the event viewers may choose to make donations. Proceeds from donations will go to the Save the Children charity. You may include a message with your donation, which will be displayed on screen during the event and will also be read aloud during the event where time allows. Donations can be made at this link. There are also rotating prizes that can be seen on the donation page that you may be entered to win depending on the donation amount.

There is currently an ongoing bid to choose the name of luxidream’s fruit during the speedrun. NetHack allows a custom “fruit name” which can be set as an option, and will appear as a common food item during the run. Names like “avocado”, “slice of pizza”, or “cup of coffee” are common examples, but anything goes! To make a bid, search for the NetHack bid option on the right when making a donation. You can also put your donation towards an existing bid to increase the total bid, the list of current names is available here. Since the fruit name bid will end at the start of the NetHack speedrun, the donations must be made prior to the run and will not be read aloud during the NetHack run.

All of the information above is based on my understanding of the event and is subject to change, please refer to the official ESA website for complete and up-to-date information.