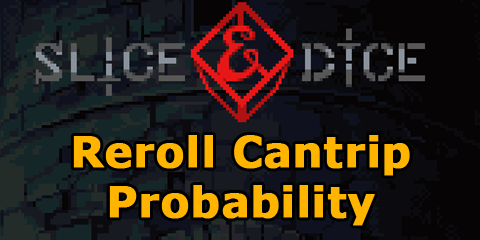 Once again I’ve found myself playing a lot of Slice & Dice, and decided to share a few more probability tables for the game. If you want to learn more about Slice & Dice, my previous probability tables, and how to use them, check out my previous post where I shared the initial tables I had made. This time I’ve made some tables for scenarios that include heroes with Reroll Cantrips — faces that, when rolled, allow you to reroll all of your dice additional times. Having a hero with a reroll cantrip in your party increases the probability that all of your other heroes will roll their best sides.

The specific scenario that these tables represent is the probability of a hero rolling their desired faces, given a number of starting rolls, and a single other hero in the party that has at least one reroll cantrip face with a value of 1 “pip” (which means you get a single additional roll of the dice when you roll that side). The most common scenario involving reroll cantrips is that you have a single hero in your party with a single dice face that gives a single additional roll when that face is rolled — just like our friend the Bard here. Let’s take a look at this case:

This table is used the same way as my previous tables. Note that the Rolls columns on the table here denote the current rolls available before adding the cantrip rerolls.

Benefit Over No Reroll Cantrip

I was curious about the actual value that a reroll cantrip provides to your party, so to visualize this I made a table that shows the probability differential of this scenario versus the base probabilities. This table shows the increase to the dice roll probabilities:

The most common situations you’ll have are 1-4 Target Faces with 1-3 Rolls to find them, so having a reroll cantrip in your party ends up being an additional 3-5% probability to have good rolls, approximately (this is the flat difference between the two probabilities, not a relative percentage increase). This is applied to all of your other heroes and can make a real difference when considered across many turns.

So far we’ve only discussed the most common case for reroll cantrips that we’ll find during a game of Slice & Dice. But there are more cases out there: you can have multiple heroes with reroll cantrips, heroes with multiple reroll faces, heroes with cantrip faces that add multiple rerolls — you can even have the Growth keyword applied to your reroll cantrips! The math for many of these cases again gets increasingly complex (a common theme as I further attempt to analyze this wonderful game), so I’ve made a few additional tables which apply to a few real scenarios but can also serve as a proxy for estimating some other situations.

The following tables are for the same scenario as the first table above, except the hero with the reroll cantrip now has multiple dice faces with 1-pip reroll cantrips:

I need to give a big shout out and credit to ktur for doing all of the mathematical heavy-lifting on this one. They reached out to me after seeing my previous post and offered to help with these more complex probability scenarios. That same day they sent me the solved and simplified formulas, so I could make these tables and share them with you all!

If you enjoy posts like this and would like to support my work here, please check out my Support Page. I also have a playlist of Slice & Dice videos on YouTube.

I hope you all find these tables interesting and/or useful! They immediately helped me calibrate my own evaluation of reroll cantrips when drafting heroes. I have some other fun analysis topics for Slice & Dice that I’m looking forward to analyzing and sharing here, and if you have any comments, suggestions, or requests, please let me know below or through any of my other contact channels (Discord, Twitter, Email, etc.). That’s all for now, thanks for reading!