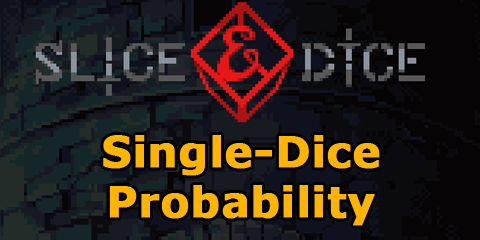 I’ve been playing a lot of Slice & Dice lately, a game where all of the heroes and enemies are defined by a 6-sided dice, a health total, and sometimes a spell or passive ability. Your party is made up of five heroes, each with a general role, who each roll their dice every turn, and the player is given the option to reroll up to two times (or more, or less, depending on other modifiers). This decision whether to keep or reroll each dice is the core gameplay element in Slice & Dice, and the focus of player decisions. Deciding what to do with each of your dice while dealing with the enemy actions and keeping your party alive for the next fight becomes increasingly complex despite the straightforward mechanics.

After playing for a while, I wanted to check my intuitions about what the best course of action in certain scenarios was, so I did what I will always inevitably do if allowed to play a game long enough: I opened up Excel and built a spreadsheet.

The following table displays the probability of getting any result on a dice given an allowed number of rerolls. Decisions are much more complicated than this — as you often need to factor in the potential results of other dice to achieve certain goals during a turn (like defeating an enemy or saving an ally), and the decision tree for even a single dice often changes depending on what the results of the the subsequent rolls become — but I’ve found this table to be a great tool for analyzing situations and making better, more informed, decisions.

If you enjoy posts like this and would like to support my work here, please check out my Support Page.

To use this table:

Let’s say that the Thief needs to roll at least 1 Damage to kill the last enemy and win the floor. The turn’s initial roll turns up the Shield 1 face, and there are two rerolls remaining for that turn.

There are four faces on the Thief’s dice that will achieve our goal of doing at least 1 Damage (the two 2 Damage faces and two 1 Damage (Ranged) faces), so our Target Faces is 4. We have two rerolls to use so our Rolls is 2. Following the 4 row under Target Faces and the 2 column under Rolls, we determine that there is an 89% Chance that the Thief can do at least 1 damage with their remaining 2 rerolls.

This table is really flexible. One more example of a way I’ll commonly use this is to determine the probability of two different dice achieving certain results. This is simple, you only need to multiply the individual chances of each dice rolling their respective sides. So if you have 2 rerolls remaining, your Thief needs to deal 2 Damage (2 Target Faces, a 56% chance), and your Adept needs to generate 1 Mana (4 Target Faces, and 89% chance), then you multiply the two probabilities together (in their decimal form) to get the resulting probability: 0.56 x 0.89 = 0.50, or a 50% chance.

If I’m going to publish a table like this as a reference, then I’m going to be thorough, which is why the table allows for up to seven rerolls despite it being rare to ever have more than two on a turn. So I’ve also created two additional sets of tables: one for single-dice probabilities for dice that have reroll cantrip faces on them, which affects their probability; and another set that shows the same data but in decimal form instead of percentage form, and with an additional significant figure (which helps when doing additional math using probabilities from the table).

I noted at the beginning of this post how complicated the decisions in this game can get, and they often do. I’d like to do some additional posts like this one in the future, for other common scenarios, such as the chance of rolling 2 total mana with both the Acolyte and Adept (I’ve done the math on this already, it’s 71.6%, higher than I expected!), or an evaluation of options when rerolling the Evoker’s dice. Another common situation that I haven’t quite wrapped my head around yet is the probability of getting a result on a dice, when another hero’s dice has a reroll cantrip (I believe this is would be the sum of an infinite converging geometric series, which is something that I would need to brush up on).

I’d love to hear if anyone else has any frequently encountered situations or tricky problems worth taking a deeper look at — this game is full of them! If you do have any, or have done your own analysis like this, I’d love to hear about it. Please let me know in the comments below or via any of my other contact channels (Discord, Twitter, Email, etc.).

That’s all for now, happy Slicing & Dicing, and next time you think you know the safest play, check yourself — you might be surprised.