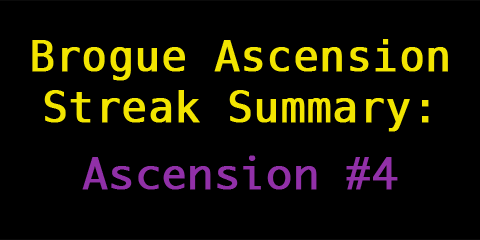 This run was nearly lost from very early on, as I almost died to a double jackal pack on D3. When I saw them, I first yolo-equipped a rapier, thinking it to be the safest play (which is probably still true), but it turned out to be cursed.  I then quaffed a random potion and got confusion; my positioning wasn’t the best for this draw but it was one of the better things I could have gotten, and I managed to survive by throwing darts while we were all confused.  Jackal packs in general are one of the things that I think are most likely to kill you in the early game, so seeing over seven jackals appear at once was something I felt lucky to survive.

I picked a +2 flail, +3 ring of regeneration, and staff of conjuration/3 from early reward rooms.  I used a +1 whip for a while as I held off on using any enchants on the flail, which was surprisingly strong up through D8 or so. It’s fortunate that I didn’t see any ogres, but the whip is very good for vampire bats at least.

I had resisted enchanting the flail until D9, where I put two enchants into it so I could lose the strength penalty.  On that same floor I found an Ifrit, which is an extremely overpowered legendary ally for this stage of the game, so I’d kind of wished I’d waited, but ultimately I didn’t see anything heavier than a rapier for the rest of the run — at least not until I found a dragon carrying a war pike all the way down on D26 — so the flail ended up being the best choice.  The Ifrit cleared a few floors for me but ultimately died an “early” death as I fell through several chasms and ended up on D14 (which is around where it isn’t totally unexpected for them to die anyways), before my way back up to D11.

I ended up finding three blinking/2 staves, not including one I passed up in an early vault for the staff of conjuration.  That vault also had obstruction and tunneling but conjuration felt like the best thing to survive the early game (double jackal pack disagrees) since I had a then-not-known-to-be-cursed rapier which has some light synergy with conjuration.

After enchanting the flail to +10, I was feeling pretty comfortable against any enemies below that very concerning tier that is made up of tentacle horrors, golems, and dragons — and I was no where close to feeling comfortable fighting those enemies (golems were fine actually, just slow). So I decided to save my last four enchant scrolls to use as consumable haste and blink charges.  At one point I enchanted a blinking staff in a really sweet maneuver to extend the range of my blink by two tiles so I could get to a door just in time to sneak attack a lich.

Ultimately this was significantly more comfortable late game than my previous win with the war pike, despite only using a flail and having similar support items, due to a better potion selection (although still no invisibility).  The potions and scrolls you find on a run can go a long way towards avoiding trouble in the late game. Ended up winning this one with two enchanting scrolls to spare in my inventory.