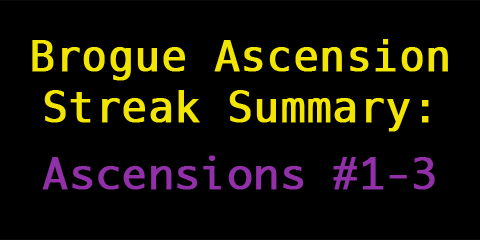 I’ve been playing Brogue again recently, and this time I decided to try something a little different — I had seen some discussion about fairness and luck in the game, and how often a game is winnable, so I thought I’d play some games with the goal to just win the run: simply escaping with the amulet — not playing for extended victories, or lumenstones, or falling for the irresistible allure of whacky builds (as I often do). I’ve also decided to play online, via WebBrogue, which tracks games for each user and keeps record of the longest win streaks across all players. This seemed like the most legitimate way to track something like this, although it’s still very easy to cheat on WebBrogue since it tells you what seed you are playing.

I had expected that I’d need some time to knock off the rust — which is known to accumulate in damp, unexplored, everchanging dungeons, as they sit waiting for their next ill-fated adventurer. But I’ve now won every game I’ve played so far, tallying to a streak of six wins, the longest on the site for any version of Brogue or BrogueCE. The previous streak on the current version of BrogueCE 1.10 was Benkyo’s three successive victories, with the longest recorded streak on any standard version of Brogue (vanilla or CE) is four victories, achieved a few times across several versions.

The intent of this post is only to share the game summaries, so I’ll keep this introduction as brief as possible. I have a lot more to say about Brogue, this sequence of games I’ve played, and streaks in Brogue and other roguelikes — spoiler: they’re largely variance and mostly meaningless — but I’ll save all that for a writeup whenever this streak inevitably ends. I was going to save all of this for a single post at the end, but these summaries were getting quite lengthy!

The first few summaries are my recollection after winning three or four games — as my ego isn’t quite large enough to start documenting these before winning even a single game — so they are brief and much of the details are approximate. As the streak progresses, these summaries have gotten lengthier, more detailed, and describe my decision-making progress much more closely. This first post is a collection of the shortest summaries, which are for the first three ascensions.

This was a very typical, clean ascension, and a great run to return to after a long break. This was my first time actually maining a war pike.  Two discord staves was very nice, there were enough charges to use one or two on any group of enemies, which is extremely helpful for this kind of build.  Ascended with the Untempted achievement, which means no gold was collected during the entire run, and also makes this the lowest scoring ascension possible (fun fact I learned recently: this achievement is actually named after me in the code).

This was a very fun game.  I had made a critical mistake early while use-testing a cursed broadsword, and missed the opportunity to negate it so that I could main it for the run; so I ended up building around a +0 war hammer instead.  Rings of +4 awareness and +3 clairvoyance as early finds from vaults meant I didn’t really have to search at all for the rest of the game. These rings were the early-game MVPs, as I only had the firebolt staff (enchanted from /4 to /5 when I use-tested some scrolls and found enchanting) and needed lots of time to regenerate health and to allow the staff to recharge, as I waited impatiently for the moment that I could actually use the war hammer in a seed with few early strength potions.  Using a war hammer with clairvoyance is good fun, allowing you to get the jump on many monsters as you wait for them to walk up to you through a door or at the end of a corridor.  I wore the +3 clairvoyance all run while frequently swapping between the +4 awareness and +2 clairvoyance ring for extra clairvoyance range. I mained the splint mail for most of the game once I was able to wear it — I had dropped the scale mail and stealth ring around D21 and picked them up again while returning to D1 with the amulet.  I had forfeited the Untempted conduct late in the dungeon when things were getting very dangerous and I didn’t want to use resources to avoid a gold pile dropped by a dar in a doorway.

Picked up a +0 war pike from a D2 vault, followed by a +0 plate mail from a D5 vault.  Safe, boring choices — or so I thought: below-average enchanting scrolls throughout most of the game meant that my war pike was having trouble killing things as reliably as I’d like (enchanting scrolls did eventually even out to 14 found scrolls by D26, as is often the case); S-tier consumables like telepathy and invisibility were quite rare (only finding one of each all game); no life potions for the end of the game (I probably missed one somewhere while running for my life (har har) through the final few depths) — all meant that this was a very difficult and hardwon victory.

I had a string of bad encounters around D20: a grappling revenant, an out-of-depth dragon, a grappling golem (that’s a 600 hp golem that never misses btw). These events cost me all of the decent consumables I did happen to have (telepathy, some speed, descent, and fire immunity).  After this stage my win probability was likely under 50%, but in the end I managed to make it out.

A very late blinking staff find and a D26 tentacle horror ally — who acted as a glorified distraction for that floor only — were helpful as I snatched the amulet and made my ascent.  Untempted conduct was intact until a careless autotravel grabbed a pile of gold high up in the dungeon during the ascent.