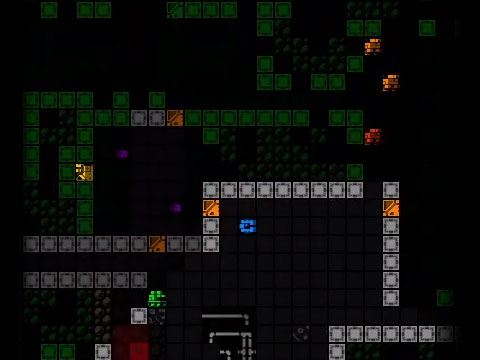 These Q&A posts will be relatively quick but hopefully thorough answers to questions I receive through discord, twitter, reddit, email, contact form, during streams, or anywhere else! Where there is interest I’ll return to these types of posts and polish them up to turn into guides.

How to stealth? Just bought the game and it does seem very interesting, but also extremely hard. I was wondering how should I go about a stealth run?

Stealth is all about leveraging the gap in information between you and your opponent. The primary component of that is preventing your opponent from knowing your position, which isn’t easy to do on its own because most enemies have the same sight range as the player (and those pesky watchers have even higher!). So we’ll want to increase our own information with items such as sensors, terrain scanners, and optical arrays. Cloaking devices also reduce the line of sight of your enemies. Hacking terminals can be used to locate exits, track enemies, reveal surrounding map data, find or reprogram traps, etc. And with all that you’ll generally want to be fast to capitalize on all this knowledge and to prevent enemies from spotting you.

So in practice, what this usually looks like is you are playing a flight build for the speed (flight builds can be tricky to set up which is another topic altogether — the simplest advice is to not transition to a flight build until you reach -7 because it can be slot-intensive and the bigger maps give you room to maneuver), are using sensors or optical arrays to spot enemies before they can see you (if you only have one or the other you have to play to the environment — for sensors this means you may want to stick to rooms and move along the edges to scout outside, and for optical arrays you want to leverage the long sight lines of corridors and large rooms to spot enemies without being in their line of sight), and are using hackware to find exits. Having a melee weapon or thermal cannon to dig through walls into other rooms to avoid enemies in main corridors is also very helpful. Beyond that you can start adding terrain scanners, transmission jammers, cloaking devices, ECM suites, etc., to improve your stealth capabilities.

I played a stealth challenge run recently where the goal was to be spotted as few times as possible which was a very fun experience and I think I only ended up being spotted 2 or 3 times. The whole run is recorded here if you’d find that helpful:
https://www.youtube.com/watch?v=Zle6mZpGxkM&list=PLnB5NenmrhCfbMz154fiPKlAwJ7qs5GWm&index=66

It turns out that never being spotted is significantly more difficult than a regular stealth run because the programmer/extermination dispatch clock is basically a hard cap to how long you can spend on any map, and watchers had to be completely avoided whereas in a typical run they are actually safe to be spotted by if there’s nothing else around.

Thanks for the write up, this helps a lot. Any suggestions on how to deal with programmers, if you do end up staying way too long in a floor?

There are probably three primary ways of dealing with the extermination/programmer dispatches, in order of preference:

1) Use the recall(extermination) hack on a terminal. This one generally requires some hackware but you can also find it as a direct hack or just get lucky. When I’m playing a flight build with good hackware then I always keep a terminal nearby that isn’t in danger of being fully traced, just to recall the extermination/programmer squads. This hack becomes more difficult to pull off each time you use it on the same floor.

2) Fight them. Throughout most of the game, programmers aren’t actually too dangerous. If you carry around a decent melee weapon or a thermal cannon (less preferable as this can destroy walls and overheat you) then you can generally face them in a choke point without having too much trouble. Carry a light armor around to swap out with one of your fragile utilities, it will go a long way if you are forced to fight. Also as a sidenote it’s also good to carry a launcher to blow up swarmers with.

3) Run from them. The extermination/programmer dispatches track you perfectly, but that goes away once they spot you. So if you let them spot you, you can then run away and they will eventually forget you. This can be difficult because they are pretty fast still, and you could end up running into more trouble as you flee.

Also sealing garrisons increases the time between the extermination/programmer dispatches.